Greetings, please find below the report of the Violence Against Dalits in Dharmapuri District on 7th November 2012. The affected people are living without any assets, so POPE is planning to involve in Relief process for this helpless people by the means of cloths, mats, school bags, notebooks, cooking vessels etc.

I am requesting your mercy for these affected Dalits.

The south-east of India is hit by Cyclone Nilam

We have very strong rain since yesterday, we had a big storm and cyclone formed in Bay of Bengal near Chennai. The Governments of Tamilnadu and Pondicherry announced the Government Holiday today. The Cyclone hit severely the Northern districts of Tamilnadu and also Pondicherry. It starts to move from sea at 4.30 pm and we are having big storm and rain, the losses in the coastal belt are not yet calculated. The both state Governments announced one day more holiday for the Educational Institutions and Colleges.

Fortunately the Nilam Storm has not affected to much the Tamil Nadu but it destroyed few places in Andhra Pradesh.

The cyclone killed eight people in Tamil Nadu and three in Andhra Pradesh. It also destroyed more than 200 electric posts and about 100 trees were uprooted in Chennai. About 3,800 people have been evacuated in Mahaballipuram.

- is a registered non-profit making secular voluntary organisation, founded in 1987 at Tiruvannamalai District for the development of the Dalits in India. Mr. R.L. Rosario is the Founder President/ Director of POPE. POPE was established to promote the welfare of the Dalits. But we found out that the caste Hindu suppressed the Dalits without allowing them to come up in life. They have been treated as sub-human. But the Indian constitution says that all Indians irrespective of their caste, religion, and language are equal. But the equality status has never been achieved by the Dalits. In order to obtain equal rights to Dalits, on par with other people, the Founder President Mr. R.L. Rosario went for his legal training. In the year 1993, he became an advocate to protect Dalit rights. Since then, POPE has been standing to protect the rights of Dalits.

For the empowerment of Dalit community,

POPE is following the foot path of Dr. Ambedkar,

POPE has organized number of activities, including the training, marching with the marginalized, procession and other community action programmes to promote the socio Economic & health status of Dalits, women and children.

POPE has learnt that in its field the main cause for the caste discrimination and the violence against Dalits are based on the economic status. So it has implemented such development activities to empower Dalits for their social development. In that way POPE formed Dalit Women Sangams in Tiruvannamalai District to start Welfare Groups and encouraged small savings. This self-help programme helped them to promote joint action for their development.

POPE has implemented the micro enterprises activities in 100 villages in Tamil Nadu. This programme helped the women groups a lot to plan for the development of their Home, Group and village and to uplift their economic status by micro enterprises and small savings. 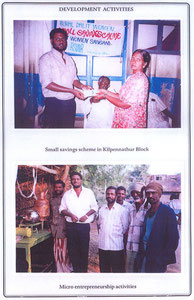 Since the concept of the health plays a major role in the well being of the rural Dalit people, POPE had implemented health care activities in the remote areas of Tiruvannamalai Taluk.

Home remedies, traditional herbal treatments are being taught to the women group to prevent deformities and diseases, and to promote and preserve their health conditions. Environmental hygiene is being taught during area visits. A health centre is established for the rural people to get health services during their acute and chronic health conditions. Free health counselling and consultation are provided through this health centre.

As in the rural community, the people are under privileged and their health problems are heavy, a 20 bedded rural hospital has been constructed at Thallakulam in Tiruvannamalai District which covers 3 blocks.

Since POPE’s target area is drought prone, and don’t have many job opportunities they migrate to cities and neighbouring states. This situation makes their lives miserable. Young generation loose their education and compelled to become bonded and child labourers.

So to render alternative income source to these people, POPE has started skill promotion training like tailoring and computer training units to the young girls, carpentry and electrician to the boys who have not completed their high school and engaged in unskilled labours. These different trainings take place at POPE Community College at Thallakulam in Tiruvannamalai District.

This is the most important programme wing of POPE. Dalit people are being organised and guided for their development and liberation under various aims and objectives.

This is a people’s movement started on April, 14, 1998 on the basis of Dr B.R. Ambedkar’s ideology, incorporated the Dalits for a Casteless society with the specific ideals of “Dignity, Self-sufficiency and Self-rule”. This acts as a powerful weapon in the hands of the people to support and safe guard their fundamental Human Rights.

More than 30.000 villagers have membership in this movement and also spreading to the Districts of Northern Tamil Nadu and Pondichery.

This movement is for the formation of casteless society, with Peace and Justice.

This is a federation of 225 elected rural Dalit panchayat leaders organised on December 31, 1997. It was started in view of educating the Dalit leaders on panchayat raj act and to strengthen their collective involvement for the welfare of the Dalits of their panchayats. The old members, except a few, are replaced by the newly elected members. And it continues its activities of periodical gatherings, planning and training to get encouragements and ideas in their village Administration.

Dalit advocates forum was established to safe guard the Dalit people from caste violations and to protect the Human Rights of the Dalits. The solidarity of the 20 Dalit Advocates are being guaranteed by this forum. Members of this forum are very helpful to the Dalit during the crisis.

They take part in the fact-finding teams; take the leading part during the meetings with police and government officials. They also jointly approach at the Court on behalf of the affected during caste and political violence.

Dalit women are being organised under this banner for their supervision, guidance and solidarity to achieve over all growth and empowerment of Dalit women.

Since DMM is involving in the people’s struggle for their liberation and human rights, it has to face the fight against the money power and the political power. By its few years’ experience, DMM learns the power and need of the unity and the need of gathering the small movements in the working areas. So DRF is formed by the like minded Dalit movements and Dalit NGOs. These hands are joined against the caste discrimination by its sincere commitment have become the great source and security for the Dalits of Tamil Nadu State and Pondichery Union Territory under 3 basic objectives:

This is our another major programme to support the depressed rural Dalits legally in their struggles towards liberation.

Since ignorance is the main reason for the suffering of the Dalit people, formal and non-formal education to the people is rendered by POPE.

Programmes are conducted periodically. Youth and women groups are being specially concentrated.

Dalit Fine Arts have traditional skills and traditional musical equipments. Unfortunately, the Dalit Artists are poor and not recognized by Government and by people. The historically significant Arts have eroded and vanished from the society gradually. So POPE takes all the occasions to give opportunities to the artists to perform their skills.

Street play is one of the most acceptable folk media, very popular among NGOs to communicate health messages and development messages to the audience. Basic training is given to the children who visit the villages and perform the programmes to the general public. 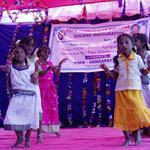 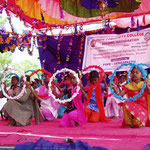 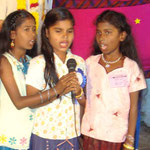 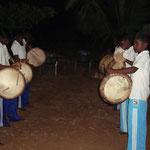 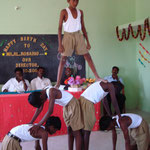 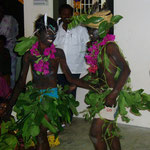 A quarterly newsletter was developed since 10 years for the private circulation. The newsletter was in local Tamil language. This has helped to communicate the following:

POPE has released printed notices and pamphlets on issues related to Dalits and create awareness on socio-economic and political situation in the society. We are also publishing a newsletter “Dalit Revival Voice” focusing on the news of our movement activities and articles from the members to raise the voice against Dalit Atrocities.